Hundreds of volunteers spent their Saturday alongside Montecito homeowners during a community-driven recovery effort to help dig debris piles from houses after the Jan. 9 flash flooding and mud flows.

Equipped with gloves and waterproof boots, some 500 dust-masked volunteers with the Santa Barbara Bucket Brigade worked nearly five hours in the sun, helping remove debris, pick up small tree branches and muddy items, shovel away black sludge from exterior walls of houses and search for possessions among the rubble.

Since Santa Barbara County Sheriff Bill Brown lifted remaining mandatory evacuation orders in the disaster zone on Jan. 27, Bucket Brigade participants have been providing essential cleanup services for the last week. Not only are many residents overwhelmed by the destruction and unable to clear out their mud-clogged homes by themselves, most had not even been allowed on their properties but for a few minutes at a time for nearly three weeks.

“This is a physical and spiritual project,” said Abe Powell, a board member of the Montecito Fire Protection District who is spearheading the effort.

“The spiritual side is that we are showing solidarity with our community. Physically, we are digging them out, which is the fundamental unit of just showing up for people when bad stuff happens.”

Powell said the need for help in Montecito is incredible, and the community isn’t just an area for the wealthy.

“There’s this idea that Montecito is a bunch of rich people — and everything is fine — and that’s total bullshit,” he said. “There’s a lot of working people, and older people living on their own.

“We are out there hugging and helping every day.”

The Bucket Brigade’s goal is assisting the community, Powell said.

“When you help people … it heals the helper, and the helped,” he added.

“It’s completely flooded and full of mud,” he noted.

“We are digging out small homes on less than half-acre parcels where they don’t have enough space for the mud,” Powell said of the neighborhood a block east of Olive Mill Road just above North Jameson Lane.

“We are trying to get it (the mud) ready to be removed next weekend through a joint partnership with multiple agencies in town.”

“When we send people to find items,” Powell said. “We give volunteers tote bins, and they work with the homeowner.”

Powell said donated funds help rent equipment used to clear mud from yards of ravaged homes. Donations also aid in purchasing food from local restaurants affected by the Thomas Fire and forced to close temporarily because of the storm damage, he said.

“Our project is to support local people and the local economy,” he said.

Sylvia Kim and her husband are facing the overwhelming task of starting over, rebuilding and moving forward.

“The damage is pretty much all outside,” she said of her house in the 100 block of Santo Tomas Lane. “We got lucky. It looks pretty good in the front, relatively. We have made a lot of progress.”

Through the time of devastating loss, she has looked to the Bucket Brigade as a positive element and as volunteers she can rely on.

“We are doing everything with volunteers and my hands,” Kim said. “We are digging out ourselves until we find out information from insurance.”

She is eager for answers from her insurance company.

“The volunteers are important for us because insurance says we are not covered yet,” Kim said. “USAA (the United Services Automobile Association), which is what we have, says they are investigating and won’t sent an adjuster out yet.”

In her backyard, she pointed to a nearly four-foot layer of mud and debris sitting atop her green grass.

“We didn’t have this, but when they did search-and-rescue, that is where it came from,” Kim said.

Kim said her family is safe and the inside of her house was untouched, but the garage was damaged.

According to damage inspections conducted by county officials, more than 400 residences and structures were destroyed or damaged.

Levels of destruction can vary from home to home, but the Bucket Brigade offers free cleanup efforts, said Linda Cole, a volunteer who lives on Cold Spring Road in Montecito.

She said clearing homes with mud inside and along the outside perimeter is a “high” priority.

“We need to get it out before it starts to get moldy,” Cole said. “Having mud sit in a house for a long time isn’t good. We are not doing anything unless we have an agreement with the homeowner. There are many different situations, but we want to help and these are our friends.”

For Cole, it’s more than just picking up trash and being on the front line of volunteerism.

“It’s personal,” she said. “My son is a good friend of Jack Cantin; he’s still missing.”

Cole said the presence of the volunteers also provides an opportunity for disaster victims to share their stories of survival and loss.

“It’s emotional and physical help,” she said. “I helped a lady sandbag before the rain, and now I’m helping clear her home. She’s older, and this is overwhelming for her — but I can sit down and listen to her.”

“This is pretty spectacular,” volunteer Thomas Cole said to a group of Bucket Brigade participants gathered Saturday morning at Montecito’s Manning Park. “We are here for a good purpose. Everything around the homes is mostly gone.” 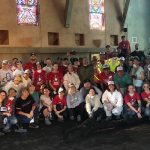