MONTECITO, Calif. – The community is seeing baby steps toward a semblance of normalcy in some areas of Montecito and great progress in others more than three weeks after the deadly and devastating mudslides of Jan. 9.

While the disaster left a deadly path of destruction and deep despair, at the same time, countless acts of heroism are happening every day. That includes a grassroots group that calls itself Mud Angels.

“I’d heard whispers about these Mud Angels and all of the sudden here I am, a recipient,” said Marco Farrell.

Farrell is one of dozens of local residents impacted by the recent disaster who found themselves on the receiving end of the Mud Angel lifeline. Farrell’s Olive Mill Road home was blanketed in feet of mud.

“Our fund was to help those most in need at the very, very early stages when they had nothing, when they were desperate, they were barefoot,” said Eric Greenspan, one of the lead Mud Angels.

Linnea Pattillo was another recipient.

“After two nights in a hotel and renting a car for three days, I was out of money,” Pattillo said.

Pattillo took us back to the Santa Elena Lane home she shares with her parents and three children. She said they made it out barefoot on ATV’s with the clothes on their backs.

“From that very moment, Mud Angels started to appear from everywhere,” Greenspan said.

Anna Prober, a mother and Mesa resident, was one of the first.

Simple requests came pouring in for the basics.

“We literally ran out of socks and underwear in all of Santa Barbara by, I would say, 48 hours after this,” Prober said.

Calls, texts, emails were coming from hundreds of impacted people, all at once.

“It grew into something huge from ‘I need help with my rent being paid because I’m out of work,’ to, ‘I need a meal tonight,’ to, ‘I need a ride to this place,’ to, ‘My car’s broken down.’ And all of us know somebody,” Prober said.

“We’ve given out 44 direct donations, instant cash transfers, electronic, to all of them,” Greenspan said.

To date, Greenspan said they’ve given out 54 direct donations and estimates the Mud Angels distributed more than $35,000 dollars to hundreds of impacted residents through a GoFundMe account (now closed), angel donors, gift cards, clothing and many other donations.

“I’m definitely overwhelmed with the support and the outreach,” said Sara Wilcox.

Wilcox is another Mud Angels recipient. The local artist said she is creating a new line that includes buttons honoring Sawyer and Morgan Corey, her friend’s daughters who perished in the slide.

“Basically healing through my art,” Wilcox said. “That’ll include buttons, bringing people together to grow and heal.”

Each person in this group is doing what they can to move forward despite mounting obstacles.

“I came home to live with my parents because I couldn’t afford anywhere else to live,” said Pattillo. “I am on food stamps. I am on medical. I work part-time. I have three kids. I’m clawing my way back into a life but I am by no means, nor is the majority of the population in Montecito, of wealth.”

Each person impacted by the mudslides and helped in some way is trying to pay their good fortune forward.

“The thing that gets your heart is the search and rescue dog prints all over,” said Farrell. “There are Mud Angels and there are other angels flying around. We’re all in this together and we’re all trying to get the job done.”

“People are their best in times of tragedy,” Greenspan said. “But I’m hoping that these Mud Angels stay above the mud and keep helping people for a long time.” 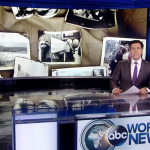